amNY: The electricians behind the Times Square ball!

“It’s a lot of responsibility,” one of the electricians said.

When the clock hits 11:59 p.m. on New Year’s Eve, anxiety kicks in for Robert Stults and Paul Alvarado.

The two electricians are part of the team that makes sure the sparkling, 11,875-pound Waterford Crystal-covered ball smoothly descends from its perch at Times Square, marking the new year for billions of people around the globe.

“It’s just nerve-wracking,” admits Stults, 43. “At that point there is nothing we can do, but we maintain it well. We’re not too worried.”

Stults and Alvarado were busy on Thursday installing crystal panels on the iconic geodesic sphere, which is 12 feet in diameter and encased in 2,688 Waterford Crystal triangles.

This year, 192 new crystal triangles are being added with a special “Gift of Harmony” design, featuring small rosette cuts.

The ball drop caps off an evening of performances by Sting, Christina Aguilera, Bebe Rexha and others.

But along with the glitz and glamour is a serious message of support for journalists, who found themselves increasingly under attack in 2018.

“Part of what we do at New Years is we look back over the last year, look at what’s happened, who are the people we love and what are the things we value most,” said Tim Tompkins, president of the Times Square Alliance. “We thought that this was a good year to celebrate journalism and the centrality of journalism and the free press to our lives not only here in the U.S., but throughout the world.” 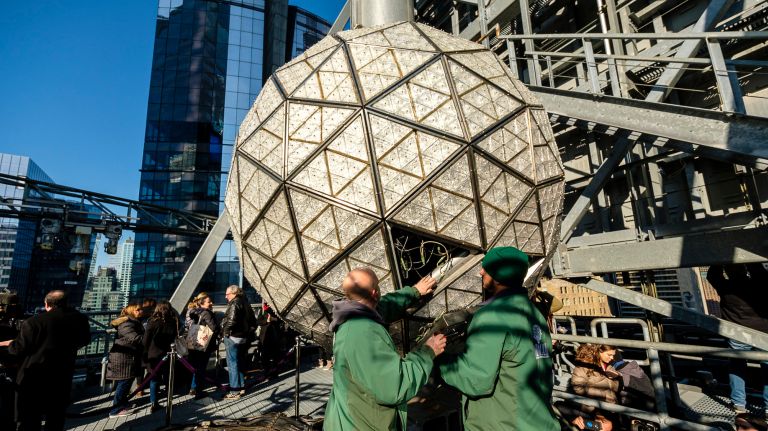 Tompkins said the Committee to Protect Journalists is the official charity honoree of this year’s event. Special guests from the world of media will be present for the ball drop.

Every year more than a million people pack into Times Square to ring in the New Year, despite freezing temperatures, rain or snow.

“There are many New Year’s Eve celebrations, but this one is truly global,” said Tompkins. “It’s kind of a pilgrimage that people make. It’s a cold night, but we keep them warm with lots of entertainment.”

Stults and Alvarado will be at the top of One Times Square to help make sure the ball’s 32,256 LED lights, which create a dazzling display of color, are ready to go.

Witnessing the spectacle is the best part of the job, they said.

“And bragging about doing this a little bit and getting free drinks at the bar,” Stults added with a laugh.