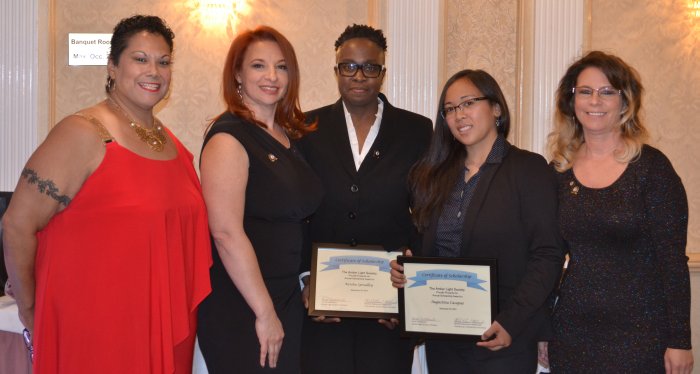 On September 25, the 5th annual Amber Light Society Scholarship Dinner honored two of our industry leaders and gave scholarships to two hard-working apprentices. Nearly 300 Local 3 members, officers, family members and well-wishers joined the club at Riccardo’s by the Bridge in Astoria for the awards presentation.
Woman of the Year Carol Kleinberg has been the dedicated owner and operator of Kleinberg Electric Inc. for the past 36 years. Carol was the first female signatory with å_Local 3, IBEW. She serves as a long-term advocate for women appointed to positions in both New York City and New York State. Her concern for women-related issues extends to her own trade where in the early 1990’s she successfully initiated a task force focused on the hiring and retention of female electricians for Local 3.
Currently, Carol is the President of the Association of Electrical Contractors, Chairperson of the Apprenticeship Committee for Local 3 and Vice President of the New York State Association of Electrical Contractors.
Man of the Year Raymond West, Sr. started in the Fixture Division of Local 3 for Solux Lighting in 1971. In 1986, along with other members of the Bronx Acorn Club, Ray received his Associates Degree in Labor Studies from Empire State College. He was a shop steward for over 25 years in midtown Manhattan. Ray is a member of the Wage and Policy Committee and has served on the Apprentice Interview Committee, the Prevailing Wage Committee, the Hardship Committee, the Death Benefit Society and has served as a teller during union elections. In 2009 Ray was assigned as the Business Agent of Local 3 North responsible for White Plains, North White Plains and Fairfield County, CT. Currently Ray serves as the Midtown Manhattan Business Representative. His area of responsibility is Roosevelt Island, the East Side from 86th Street to 57th Street and from 57th Street south to Houston Street river to river. He is an active member of four clubs: The Bronx Acorn Electrical Club, The Colony Club, The Westchester Mechanics and the Electrical Square Club.
Scholarship Committee Chairperson å_Michele Betancourt-Maldonado expressed the club’s pride in awarding this year’s Amber Light Society scholarships to up-and-coming Local 3 members Keisha Spradley and å_Augustina Casapao.
Augustina Casapao is an alumna of Seton Hall University and SUNY Empire State College. She also attended The New York City College of Technology, majoring in Electrical Engineering Technology. She has worked as an Engineering Assistant on automotive electrical systems for BMW and GM, as well as anti-terrorist security systems for defense contractor Lockheed Martin. As shop foreman and head manager for a manufacturer in the Brooklyn Navy Yard, Augustina developed energy efficient lighting systems for 150 Verizon retail stores across the U.S., ensuring all products were designed to safety standards and that all parts were manufactured in America. She became a member of Local 3 in 2013 and was chosen as an officer of the “A” Apprentice Advisory Committee in 2015.
Keisha Spradley is a 4th-year apprentice with Campbell & Dawes. She graduated in June from Empire State College with a Bachelor’s degree in Labor Studies with a 3.9 GPA. Keisha is simultaneously enrolled in Thomas Edison State College in New Jersey, earning a Bachelor’s degree in Electrical Engineering. Every year, Keisha volunteers at a premiere business conference, mentoring students from historically black colleges and teaching logistics, supply-chain management and inventory control. Past participants have gone on to work for Fortune 500 companies. Mentoring young women and helping to shape leaders has been a lifetime pursuit of Keisha’s. She has a steadfast commitment to Girl Scouts USA, helping to establish a new service unit in Englewood, NJ. She serves as the Regional Cookie Manager for Troop 5497, handling logistics for cookie sales for over 5 years. The revenue the Troop generates goes to community projects including rejuvenating and stocking the battered women’s shelter, pet supply drives for inundated pet shelters after Hurricane Sandy and helping to create a library in a kindergarten for single parents.
Assistant Business Manager Luis Restrepo closed the awards ceremony, celebrating the many accomplishments of the four honorees in Local 3.
Club President Emerita Cheryl Farrell first proposed the idea of a scholarship to promote participation in our union and to further the visibility of women in our industry. Current Club President Carol Castellaneta helped to establish the committee that brought the scholarship to fruition in 2011.
The Amber Light Society meets in the Balcony Lounge of the JIB on the third Thursday of every month except July and August. All are welcome! The January 2016 meeting has been cancelled as the club will be attending the EWMC that week. 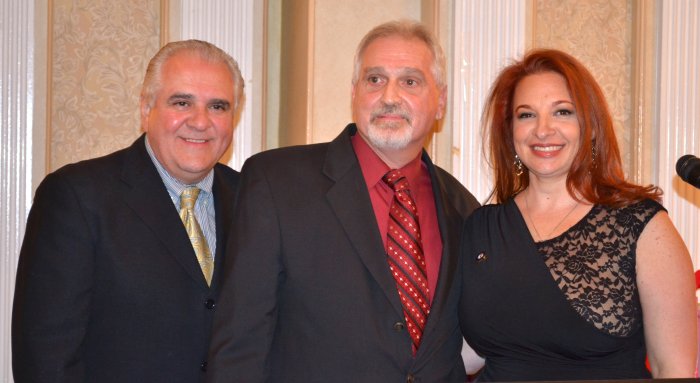