The 39th IBEW International Convention began on Monday, September 19th in St. Louis, Missouri with the theme of “Our Founding, Our Future.” International President Lonnie R. å_Stephenson opened the week-long proceedings saying, “The Convention is where we honor where we’ve been, make an honest assessment of where we are and set a course for where we’re going.” St. Louis is the birthplace of the IBEW, the city where Henry Miller and nine other linemen gathered to form an association of electricians bound by a constitution 125 years ago. With a respectful nod to the past, the Convention aimed its keen eye towards the future of the electrical industry and by all accounts it has never looked brighter.
Local 3’s contingent led by Business å_Manager Christopher Erikson and President John E. Marchell was well represented among the nearly 2,100 delegates from across the IBEW that managed the official work of electing leaders and debating and voting on amendments to the constitution and resolutions to the constitution for the next five years. Senior Assistant Business Manager Raymond Melville once again reprised his role with distinction as the head Sergeant-at-Arms for the Convention.
The host District Eleven Vice President Curt Henke addressed the convention and thanked Local 1 Business Manager Frank Jacobs and Missouri Gov. Jay Nixon for their welcoming speeches to the 5,000 delegates, alternates and guests of the IBEW to the founding city of St. Louis. The anthems of the United States and Canada were played as the nations’ colors marched down the entirety of the large convention hall while Local 3’s Sword of Light Pipes and Drums thundered proudly behind. 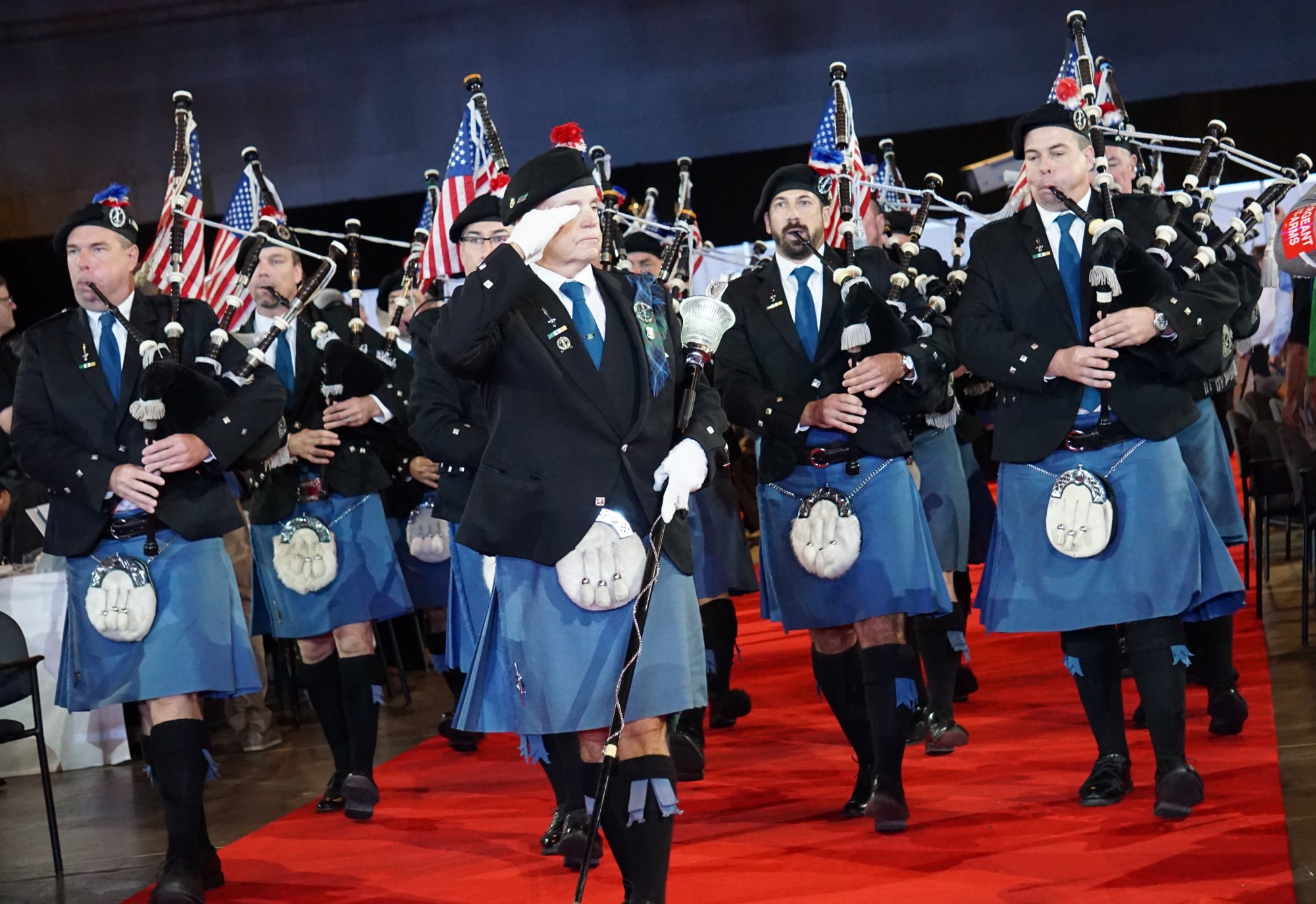 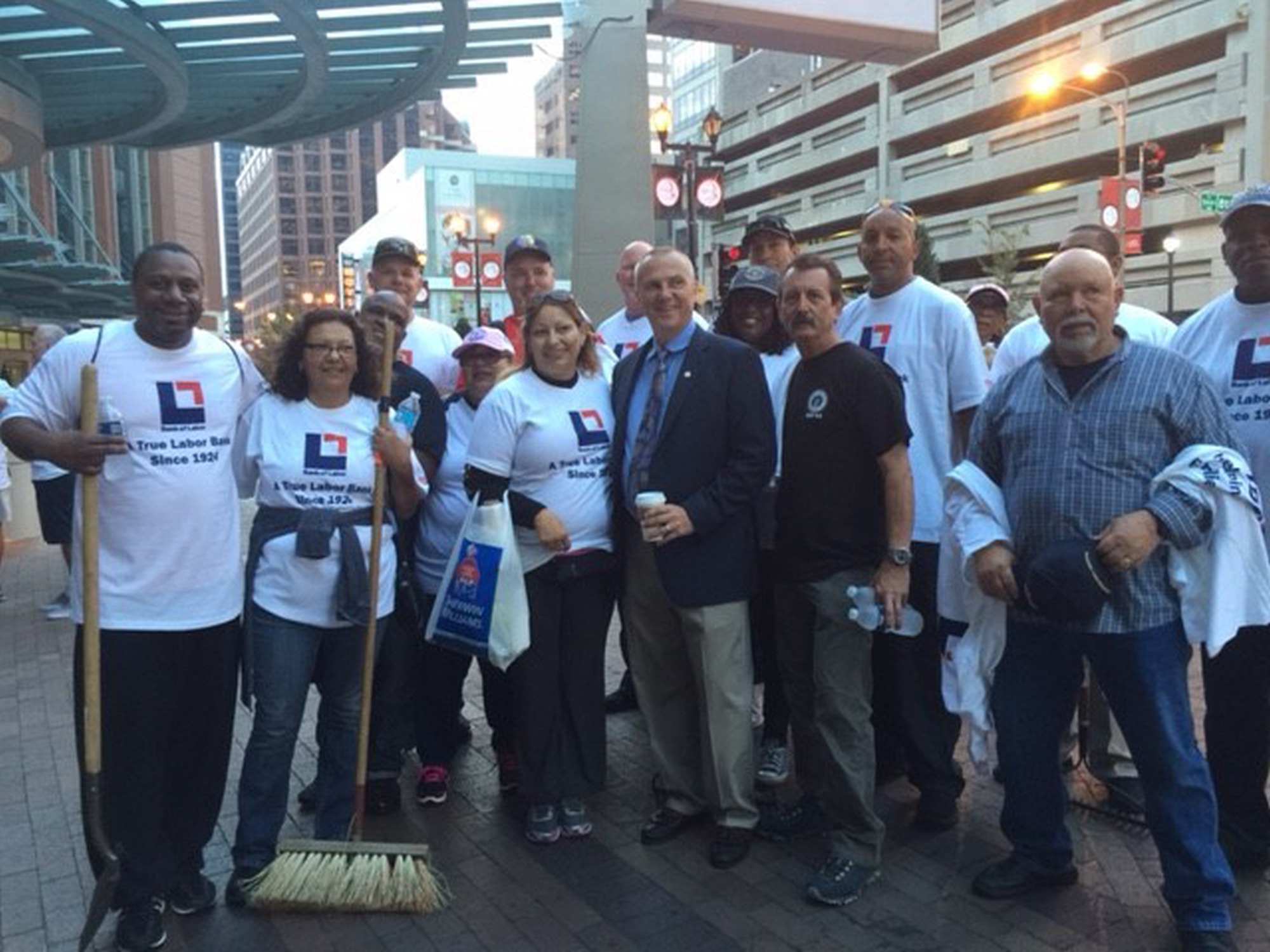 IBEW President Lonnie Stephenson pictured with some Local 3 members who participated in the Day of Service.

For the first time at a convention, delegates from dozens of local unions were up before dawn to pitch in at 26 different sites around the city, accounting for more than 1,600 hours of service in a single morning. One of the day’s largest projects was at Our Lady of the Holy Cross Church in the Baden neighborhood in north St. Louis. Much of the church’s unused space has been repurposed as an after-school and community center. “It’s a great facility that wasn’t being used,” said program director Antoinette Cousins, “And now 40 kids a day learn programming, cooking, gardening, boxing and basketball.” The neighborhood is crime-filled and often too dark for kids and their parents to feel safe coming to the center at night. St. Louis Local 1 provided more than $7,000 in LED light fixtures to improve the safety and function, and St. Louis Local 1439 provided thousands more worth of bulbs. Alderwoman Dionne Flowers, who grew up in the neighborhood and attends Holy Cross, estimated that IBEW volunteers had put over $100,000 worth of work into the church and community center.

The Women’s Caucus saw some 400 delegates attend to discuss women’s inclusion in the IBEW and to focus on political action. “We want to honor our history, but most of all, we’re here to make it. And that’s something the women’s caucus‰ÛÓand all our IBEW sisters‰ÛÓdo every day,” said International President Stephenson. “We’re going to be writing the next chapter of IBEW history starting next week. And you’re a vital part of it. We’ve made a lot of progress. But we still have a long way to go,” Stephenson said.

RENEW‰ÛÓReach Out and Engage Next-Gen Electrical Workers‰ÛÓwas formed in 2011 to inspire new IBEW leaders by focusing on issues important to younger workers and providing history and education about the labor movement. In addition to helping out with the day of service, the young workers of Renew held a caucus days before the convention to discuss the State of the Union for the next generation. With the future of the IBEW in the room, there were panel discussions, informational videos, reports from each district’s youth member representative, a question and answer session with the leadership of the IBEW and a reception that allowed young members from across the country to form the bond of brother and sisterhood at the core of the IBEW.

The Electrical Workers Minority Caucus brought together hundreds of IBEW members and guests to discuss the past, present and future of diversity in the Brotherhood. “The Electrical Workers Minority Caucus and the work you do is absolutely vital for the IBEW because the reality that today’s and tomorrow’s workforce is more diverse than ever,” said International President Stephenson. “We need more women and more people of color, especially in the industries we represent.” EWMC President Keith Edwards opened the day’s proceedings by honoring the men and women who formed the EWMC for the progress of minority workers in the electrical industry 42 years ago. “Talkers didn’t build this union. Critics didn’t build it either. It was the people who put their butts on the line, who did the work, who sacrificed lots of blood, sweat and tears to make the IBEW everything it is today. It was built by people who when they saw injustice, they fought to change it. When they saw opportunity, they worked to seize it,” Edwards said. 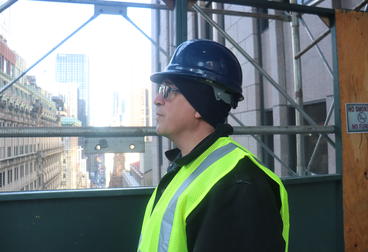 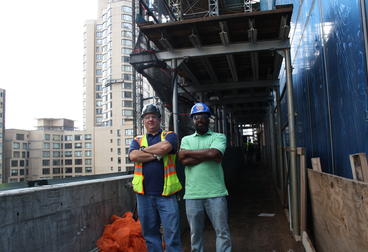 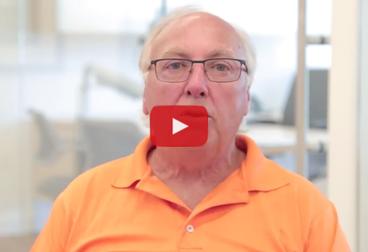